Drupal Vs. WordPress – Which Should I Use For My Website? 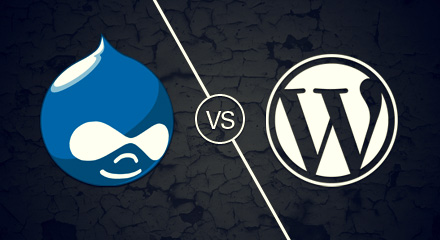 Drupal is an ultra-powerful content management system (CMS for short). We use it in tons of projects and it powers a huge amount of the world’s websites. It has a lot of great features and is a favorite of many web developers.

Drupal is completely open source and free – which is one of the many reasons for its popularity. It’s more of a framework than a full-fledged CMS though.

WordPress is very similar. It’s a free and open-source CMS but with an entirely different codebase and paradigm. WordPress powers an ever greater number of websites – somewhere around 19% of sites made today use it. (Whereas Drupal usage is somewhere near 6%, although this is a number that’s difficult to figure out.)

WordPress is a CMS that is designed to get you blogging as quickly and as easily as possible. Drupal is a framework for developers to quickly build complex websites and applications. Generally speaking, WordPress has a quicker learning curve and Drupal takes longer to master.

Those are general blanket statements though – both can be used to do the other thing, but they don’t specialize in it. Drupal takes a lot of work to make it as pretty as WordPress as far as blogging goes, and even then you can’t match some of the features of WordPress.

A WordPress site can be set up in minutes and you can have a blog post done in another couple of minutes. Literally in 10 minutes you can build a WordPress site and have it live with a blog post and looking pretty. The same can’t be said for Drupal.

But with Drupal you can have a custom content type (the CCK module), say a vinyl record collection. And with the Views module you can quickly create complex listings and sort by date, title, artist, year, etc, all in under 20 minutes and it can all be done within the Drupal admin panel. Accomplishing the same task with WordPress would take much longer and would have to be done by typing code.

They’re both great and I love them equally. (I mean, if I had to pick one to marry, it’d probably be WordPress, just because she’s prettier. Although Drupal might be the homely faced yet more steady and better long-term partner.) But they both have their use cases; each one is more suited to a different role, a different type of website.

Which one you use is not a simple decision because it can affect your website and online business for years to come. You have to think about the long term and what you eventually want your website to be. Do you focus on content marketing? Are you going to do ecommerce? What functionality do you want both at launch and within the next couple of years?

There’s so much more to this that we may end up doing a series of posts on the subject. But if you have questions, by all means, contact us for our guidance!