Google Hummingbird Algorithm Update Changes The Face Of SEO (Or Not)

Well, Google has done it again – they’ve totally changed their search ranking algorithm, this time calling it “Hummingbird”. They apparently like those animal names.

What Is The Hummingbird Algorithm?

Google says it’s called the Hummingbird update because it’s “precise and fast” – and also because like many coders at Google, it’s addicted to high fructose corn syrup. (Ok, I made that last one up.)

Google announced the algorithm update on September 26th, but the change actually happened a month before that.

This tells us quite a bit. Mainly it says that if Hummingbird was completely different and destructive, people would’ve already been complaining; SEO pros around the world would have sniffed out this update already. (That’s not to say that some didn’t notice a change in the algorithm – many did. It’s just not disruptive enough to be considered a bad thing by most.)

What’s Different About This Algorithm?

Google, in all their infinite goodness, is proceeding with contextual search. You know how they’ve introduced data that comes up immediately, presented by Google and not a link to another site? Like if you asked how many ounces are in a quart, Google presents you with the answer. You dont need to click anything else, the info is just right there, bickety bam, thank you ma’am.

That’s a pretty nice feature and it’s part of what Google calls their Knowledge Graph.

The Hummingbird update expands on the Knowledge Graph, taking into consideration more words in a search and the context of those words.

As an example, the search “compare butter with olive oil” now has some quick info for you about the calories, cholesterol and total fat of butter versus olive oil. Purty neat, eh? 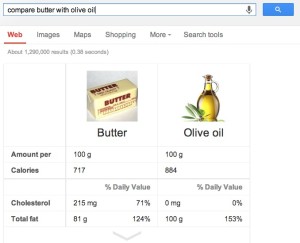 Another example, the search “space needle versus empire state building” will actually compare the buildings:

Google’s blog also mentions another expansion of the Knowledge Graph:

You can pull up your phone and say to Google: “Tell me about Impressionist artists.” You’ll see who the artists are, and you can dive in to learn more about each of them and explore their most famous works. If you want to switch to Abstract artists, you can do that really easily with our new filter tool: 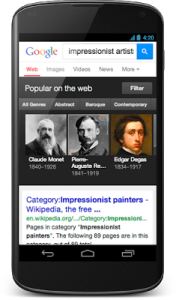 Ok that’s all well and good but how does Hummingbird change other searches?

Certainly things are going to change. Er, HAVE changed. But there hasn’t been that huge outcry like other big algorithm updates. This means that Google has almost certainly made things better for the average person.

Not everyone is going to be happy of course.

Before the Hummingbird update, the search “pizza hut calories per slice” would give you this page as the top result.

After Hummingbird, the top result would be this page, a link to similar nutrition information on PizzaHut.com.

The first site isn’t official and kind of looks a little spammy. At the very least, taking you to the official Pizza Hut page with their information seems much better. (At least in this case – other brands might not have sites as nice as Pizza Hut’s.)

Ok, quit babbling and tell me what Hummingbird means to ME!

Sorry! I tend to ramble. But that’s because I love this stuff!

What this Hummingbird update really means is damn near nothing.

That is of course, provided that you’re doing 100% white-hat SEO.

There will be some edge case scenarios where people will be pissed that they got dropped for something else that seems like a worse result than theirs. (And of course the site owner will always be partial to THEIR results, right!?) But looking at things impartially, this is offering 99%* more relevant search results to people.

(* Ok, this stat is pulled out of my ass. But the point is this isn’t hurting a ton of really good search listings. Bad SEO’s, maybe, but we’d have heard more about this update if it was really bad.)

To me, this algorithm update is really pretty interesting.

It gives the intelligent content creator/SEO the ability to craft some things that others might not think about.

Think about the comparison examples – you could write content that is targeted to be in the first couple of listings. For instance, a movie theatre could create a page like “What is a better movie, Thor The Dark World or Captain America The Winter Soldier?”.

This might not be a great example, but it should get the gears spinning.

How about a post titled, “When Is Thor The Dark World playing in San Diego?” This seems sort of spammy to me, but it’s just an example. In any case, we can have some fun with this Hummingbird update and use any potential downside to our advantage.

We’re not looking to game the system. This isn’t a hack of Hummingbird, just some content that is valid and useful to people. If it also has the consequence of Google liking it a LOT, then awesome.

If you don’t like this update, that’s not good – because Google’s trending in this direction. More contextual search is coming down the road.

Summing up, we don’t need to worry about Hummingbird changing the SEO game too much. Keep creating great content, do that inbound marketing and linkbuilding thing and you’ll see positive results.

Thanks for reading! Fight me back in the comments if you disagree. Likewise, post away if you have other ideas for “optimizing” for the Hummingbird update.