How You Can Start Conquering Your Fear of Public Speaking 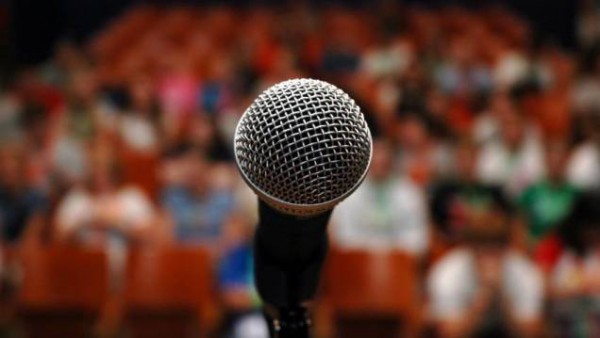 Are you nervous speaking in front of people?

It’s ok, you can learn to be an awesome public speaker! Trust me, I’m an introvert who figured it out.

Ok, maybe I’m not AWESOME at it, but I’m good at it, or at least passable. More importantly, I don’t mind it anymore and actually look forward to giving a presentation.

So how does an introvert who used to be scared shitless of public speaking become confident and grow to love it?

That, my friends, is a long story. But I’m going to try to summarize it in this blog post and then expand on it in later posts. 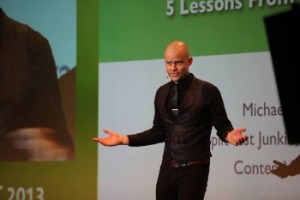 This guy is awesome! Believe it or not you can be like him someday!

For me, I had to JUST DO IT. I failed many times. I got up in front of people and just freakin bombed.

I HAD to do it for part of my job. A group of us would go out to these things called “Lunch and Learn” programs for the local Internet Service Provider we worked for.

This was in the early 2000s when people were still figuring out the Internet, especially the older generation. They needed a LOT of hand holding and training and they just loved these presentations.

We basically just showed them how to browse the internet and use email – something that was right up my alley.

How it worked was each of the 4 of us would talk about different things. We’d break for a snack at one point and then let the audience ask questions.

When my co-workers were giving their presentations I’d be working up my nervousness, thinking about the fact that I had to talk soon. I’d be sweating profusely and it felt like my heart was going to burst through my chest it was beating so fast. I’d get that thing where you’re almost hyperventilating and I wanted to run out of the room.

But when it was my turn, I would do my best. I’d stutter and falter and say “um” and “ah” way too much. Or I’d talk way too fast – to the point where some old guy called me out and was just like, “Son, can you PLEASE slow down, I can’t understand a thing you’re saying!” (Partly because of the techie stuff I was saying but mostly because I was so nervous!) 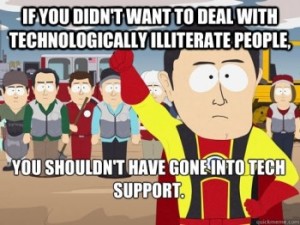 Something I’d like to tell my 25 year old self :-p

But my co-workers were my friends and they had my back. They’d interject and help out, in some cases taking over for periods of time.

I didn’t realize it at the time, but it was the perfect training ground for getting over my fear of public speaking. The audience was a bunch of old people (many retirees with lots of time on their hands) that just wanted people to listen to. They weren’t overly particular or mean at all.

I also had people there that had my back. It was like having training wheels because it wasn’t just me all alone giving a presentation.

It really helped that I was talking about a subject I knew a ton about. Computers and the Internet were second nature to me, so I could confidently talk about this stuff.

We did this over the course of months, doing about one per month. So I could get better at it and analyze myself and the other people performances.

I could also sit back and watch my friends give their talks. This was IMMENSELY helpful.

Most importantly I learned confidence. I learned that it’s ok to stumble a bit and appear nervous in front of a crowd. They don’t mind and when you humble yourself in front of them you can win them over! Just tell them you’re a bit nervous and proceed as best you can.

And like anything, you have to JUST DO IT. Iterate, over and over again. Practice makes perfect and doing public speaking is the best way to get better at it.

If you can find some friends to help you out, awesome. Maybe you can start talking in front of a couple people and just keep speaking in front of larger and larger audiences. But soon you’ll realize it doesn’t matter how many people you’re talking to because it’s essentially the same thing. It’s just you talking to people.

I really hope you try it out and get over the fear of public speaking because it’s so freaking awesome when you’re rewarded with an audience applauding you at the end! And it’s a skill that will pay for itself a thousand times over during the course of your life.

So good luck, and get on out there!