A friend of mine made a really nice site. He’s a younger guy and had to make something for a final project before graduation at Full Sail University. 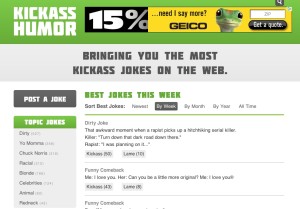 The content is fairly straightforward – some adult humor that might be considered unacceptable by some. Me, however, I love it 🙂

When the zombie apocalypse finally happens, I’m moving to Washington D.C. I figure the lack of brains there will keep the undead masses away.

It’s the content that drives the site, but that’s not really what I want to talk about.

The point is that you could build a site like this around anything and be successful with it.

This site is all custom-coded because my friend was learning as he did it. But you don’t have to do that. There’s so much out there to give you most of what you need to build a similar site in content management systems such as Drupal or WordPress.

Once you have it built, you’d have to promote it a bit. He had some links to it from YouTube which helped to jumpstart it.

This site works because it’s a clean and simple design, it loads quickly, and it’s very specific. People get what it’s about at a glance. If you like dirty, funny jokes then you instantly know this site is for you.

Speaking of “funny jokes”, that’s one of the keywords the site ranks really well for. People don’t really search for “kickass jokes” that much, but at least the “jokes” keyword is there in the title. Nowadays having the keyword in the domain doesn’t matter as much (ever since the exact match domain update) but it’s still kind of nice to have part of the keyword.

He does pretty well on traffic and ads as well. However – one big warning here is that site content matters.

He was originally using Google Adsense. Adsense is pretty picky about the sort of content that the ads go on, and apparently they didn’t like some of the nasty jokes. (Yes, Google is smart enough to tell racist & insulting jokes!)

Also, the recent Google Hummingbird update cut his traffic into a third. What I think is that Google devalues little bits of content – all he has are short jokes. Users add jokes all the time, so it’s getting fresh content; it’s just little one-liners or one or two paragraph things. Also, it’s possible that these jokes aren’t unique – that they exist elsewhere on the web, and that the site doesn’t really have that much unique content. That might’ve been ok before Hummingbird, but now “The Algorithm” is smarter.

One thing I mentioned to him is that he could add several blog posts of related content about jokes and see how that helps out. As we know, Google loves good, fresh, related content.

That’s it! What would be some other types of content to build a similar site around? Have you had similar successes or failures? What else could be done to improve this site?