Lima Ohio was in fact named after Lima Peru.

Back in the day, before the 1900s, almost all of northwest Ohio was swampland known as the “Great Black Swamp“. The Black Swamp stretched from what is now Toledo, south almost to Lima and west to Fort Wayne, Indiana. 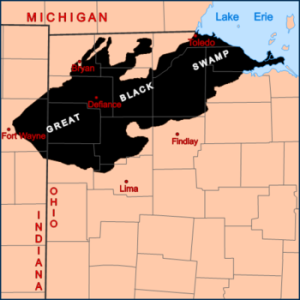 I don’t know about “great” but it sure is black.

The Black Swamp made travel a huge problem during the wet seasons, but eventually steps were made to drain the swampland.

However, in the early days of settling Ohio, the swamp was still a big problem as were the mosquitoes that went along with it. Malaria was prevalent and endemic.

Settlers began to terraform the region and get rid of the swamp in the 1850s. There were many different projects to help this effort, but perhaps the best one was the invention of the “Buckeye Traction Ditcher“. This was a machine that laid drainage tiles at a super quick pace – better than anything seen to that point. This helped the land dry up and destroy the environment that the mosquitoes thrived in. 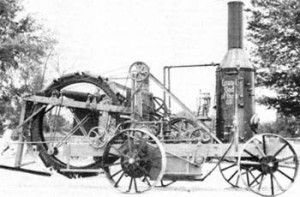 The original Buckeye Traction Ditcher made by James B. Hill.

Back during the malaria days of the 1800s, there was only one way to treat the disease. That was through the use of quinine bark that was manufactured in Lima, Peru.

In 1831, the Shawnee Indians were kicked off the land and sent to a reservation. That year the town of “Lima, Ohio” was incorporated with the name a nod to the place where the cure for malaria came from.

Of course, it’s pronounced a bit differently then the city in Peru – Lima is pronounced “lie-muh” as opposed to “lee-muh”, but the two cities are still connected to each other.